Of Comcast and Customer Rage

When trying to decide what to blog about today (I'm trying to adhere to a new Monday/Friday schedule) I was interrupted by a call from Comcast. Comcast, both as a company and a top-notch example of how to fail in every aspect of "customer service," has been bleeding my energy lately. Not in the sexy way, like current pop culture vampires who are all brooding and sensual. No, in the disgusting way, like a tick who doesn't realize it's a parasitic drain on resources. 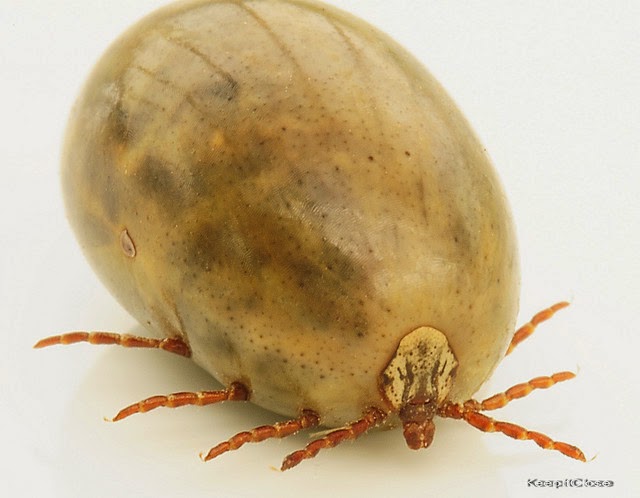 Since April 1, my Internet-the only service I have through Comcast-has been unstable. This wouldn't be such a major problem if 1) both I and my husband didn't work from home and 2) if I weren't paying nearly $100/month for a service Comcast doesn't seem all too interested in providing. What follows is an abbreviated version of the epic journey I've undertaken over the last 28 days.

I called the number provided by Comcast, which was my first mistake. I've been transferred, disconnected, blatantly lied to, deliberately hung up on, accidentally hung up on (she didn't know how to use a phone, bless her heart), given false information, condescended to, and generally fooled around until I have actually gone over my monthly allotment of cell phone minutes. When's the last time I went over cell minutes? WHEN MY SON WAS BORN. In context, that means Comcast has taken more of my time and energy than anything except physically birthing a tiny human. Honestly, it's also been more painful.

In addition to calling, I've emailed. I've direct messaged. I've done everything but send up smoke signals and beat out some Morse code. You can probably guess the competency of the response I've received in return. The only thing Comcast representatives seem able to do with any small scrap of ability is attempt to sell additional services. Yeah, the ones I'm paying for now aren't working, so let me go ahead and start forking over more cash based on promises of impending competency. That's exactly what I'm going to do, just after I go check out a bridge that's up for sale in Brooklyn.

I finally thought I'd gotten it straightened out after yesterday's stroll through the halls of bungling blather (i.e. "Customer Service"). Finally, FINALLY, a technician has been scheduled to physically come to my home on Tuesday and discover the source of the problem. It's my fault, really, for being naive enough to believe. I may as well have clapped my hands and hoped Tinkerbell would show up with a new modem and wireless router. 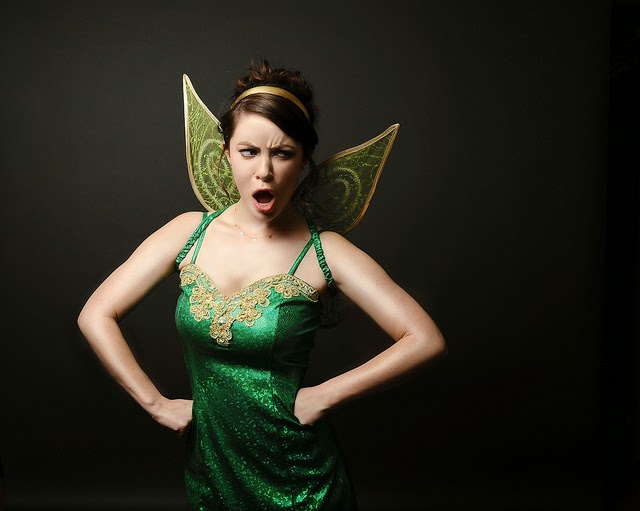 Tink doesn't want to be associated with Comcast any more than the rest of us
photo credit: Dustin Diaz via photopin cc

The call I got this morning was to apologize for ALL the inconvenience (special note to Comcast: click here) and confirm my appointment for Thursday.

Well, it is the only other day starting with a "T" in the name, so I guess they get credit for that. But no, my most specialest of special snowflakes, the day in question, the one I rearranged my entire schedule to be available for? Yeah, that's a Tuesday. The day after Monday. The day before Wednesday. I know it's a hard concept. There are 7 whole days to memorize, and the organizational pattern, where one ALWAYS follows the next? Yeah, that's tricky.

What makes this all even sadder? I'm 100% certain the only reason Comcast "Customer Service" (no, I really can't write it without irony quotes) contacted me is because I gave my frustration the 140 character treatment. That's right, I tweeted about it, and hashtagged Comcast when doing so. Had I not bothered, had I just been the victim of ridiculously bad "customer service" but kept it to myself, Comcast would not have cared one bit. Why should they? They're still getting my money and they have a monopoly in my area; they have no reason to care. But because that tweet has the potential to add to the ongoing dialog of how horrible they are at providing even the simplest services, the services their company is supposedly known for, now I'm a liability that must be mitigated.

Helpful hint to those on the problem mitigation squad: PROVIDE THE SERVICE I'M PAYING YOU FOR. Bastards. 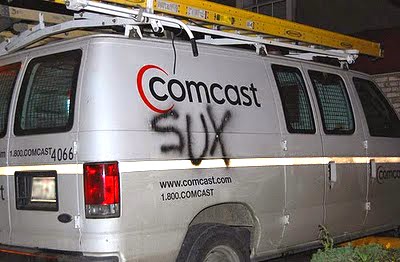 Pretty much accurate.
Picture from the Comcast Sucks Balls Blog. If it's yours, let me know and I'll happily provide credit.
Posted by Gretchen Stull at 9:41 AM