I was fortunate enough to attend JR Ward's book signing for her new release Lover Mine yesterday. Naturally my partners in BDB-related crime, Sherri and Lara, were with me. Can't go to a Brotherhood-fest alone. And I thought I'd share the tale of adventure, leaving out small details like driving a 30 miles out of our way because none of us are capable of reading road signs that aren't entirely relevant. Ahem.

Lover Mine is the 8th novel in the Black Dagger Brotherhood series.

Since JR does not fly, all of her signing locations are within driving 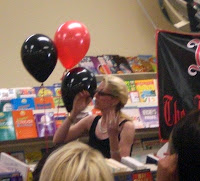 distance of her Louisville, KY home. Yesterday's locale was The Book Store in Radcliff, KY. It's a quaint little shop that was bursting at the seams with fans of the BDB, each anxious to hear what JR had to say about the newest release. She did not disappoint.

These signings are notorious for spoilers, the primary culprit being JR herself, who 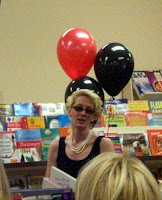 always speaks with excitement about the latest book and where the series is heading. This book signing was no exception, and while it was standing room only, the wait was well worth it. It's been confirmed that the series has no planned end to it, she's going to keep on writing as long as the readership is there. She also confirmed some upcoming stories.


Manny and Payne, unsurprisingly, are slated as the hero and heroine of the next BDB 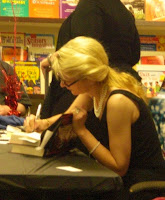 installment. Quinn and Blay have been confirmed as a future couple, though their story will likely be told in novella form as she doesn't want to alienate any of her readers who may feel uncomfortable with their relationship. Layla will receive her own book, as will Tohrment, No'One and Muhrder, though she has not confirmed whether or not any of these characters will be paired together. She also alluded to the Shadows, Trez and iAm, getting their own HEAs.


JR confirmed that she's sent her publisher 2 smaller novellas tracking the lives of some of the brothers who already had their own books. Wrath and Beth's story will be continued in one of the novellas, and Rhage and Mary will finally have a child in the second.


Great times were had by all and I'm already excited for the next Book Store signing, which will likely be for Crave, the second novel in her Fallen Angels series, set for release this fall. If you are a fan of JR's writing and ever get the chance to see her in person, I highly recommend you jump at the opportunity. 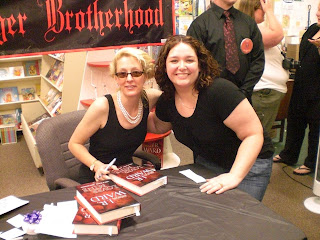 Posted by Gretchen Stull at 1:56 PM